Libyan rebels in Tripoli managed to storm Bab al-Aziziya, Moamar Gathafi’s residence and stronghold. As a result, we’ve managed to find out a number of interesting things about the Libyan strongman. One of the things discovered was his son’s diplomatic passport which listed his name as “Mohammed Gathafi.” It also listed his title as “Son of the Leader of the Revolution,” refering to his father’s preferred title as head of state. The Atlantic reports:

The proper spelling of the Libyan leader’s name has long been a source of banter and argument among Western journalists and editors. Debates over the most accurate spelling of his name are so common that they were once featured in an episode of the TV series The West Wing. Some hobbyist linguists have even parsed the multiple spellings into computer code and a handy chart… Part of the reason his name’s spelling has remained so unclear is that Muammar Qaddafi has long refused to use any language other than Arabic in public, despite pervasive rumors that he is fluent in English and Italian. But while Qaddafi could conduct international diplomacy without using English, consular bureaucracy is far less accommodating. A diplomatic passport requires Latinized text, something even the self-described “King of African Kings” could not get around. But he could keep it secret, or at least until now.

Well, we can put that conundrum to rest. Now we go from the merely curious to the somewhat nauseating as rebels also discovered a photo album, belonging to Gathafi, filled with photos of former Secretary of State, Condoleezza Rice. 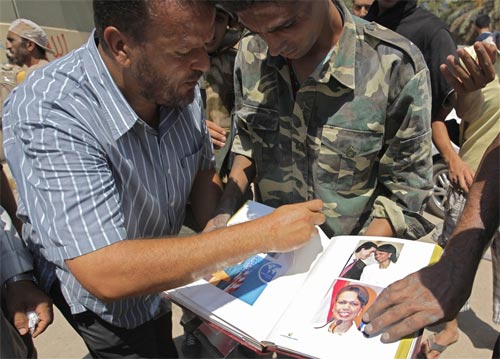 The suggestion is that Gathafi might in fact have had a crush on Rice who had visited Libya in 2008:

In a 2007 interview with al-Jazeera television, Gadhafi spoke of Rice in glowing terms. “I support my darling black African woman,” he said. “I admire and am very proud of the way she leans back and gives orders to the Arab leaders … Leezza, Leezza, Leezza. … I love her very much. I admire her and I’m proud of her because she’s a black woman of African origin.”

Aw sweet! If Gathafi manages to evade capture despite the $2 million bounty on his head, he will be pleased to know that darling, sweet Condi is still single and childless (apparently that’s how he likes ’em), and is teaching Politics and Business at Stanford University.

Anyhow, Mazel Tov to the people of Libya!