The Unofficial Guide to Drugs on Birthright Israel 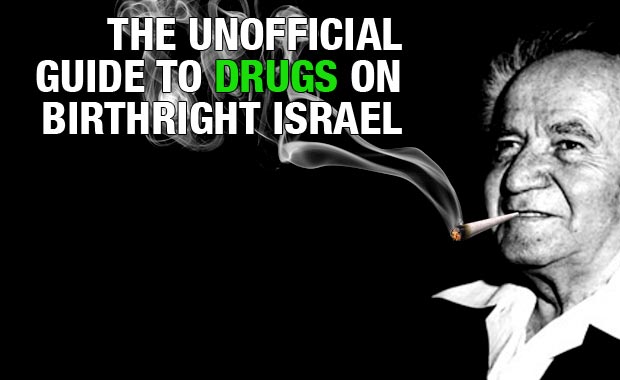 Registration for the next round of free trips to Israel with Birthright Israel begin on September 13/14 2011. If you’re Jewish, between the ages of 18-26 and have never been on a peer-based trip to Israel, this is your opportunity to enjoy a free 10-day trip to the Land of Milk and Honey! You can get more information on the Birthright Israel site. There’s lots of information available there. Lots and lots. But not everything you need/want to know.

That oversite is what inspired our Unofficial Guide to Sex on Birthright Israel and it is what inspired our decision to compile this guide on getting high in the Holy Land. I mean why not? You’re not at work, you’re traveling with your friends in an exotic setting – what’s wrong with a little recreational pharmaceutical fun? Before you contemplate such a course of action there are a number of things you ought to know.

There is no right against unreasonable search and seizure in Israel
Yup. Even if you’re American, Israeli police are allowed to search you any time they feel like it. The Fourth Amendment’s privacy rights will not protect you here. And when the po-po stop someone Jewish, between the ages of 18 and 26, the thing they’ll be looking for the most is illegal narcotics. If they find any, you’re going to jail. And that’s just for starters.

Drug transactions in Israel involving tourists usually don’t end well
At best you’ll get ripped off – you’ll either be sold something that isn’t drugs, like a bag of dried parsley instead of weed or an aspirin instead of ecstasy – or the “drug dealer” will simply take your money and give you nothing in return. What are you going to do? Complain to the Police? Not likely. Fight? I doubt it. Heck, if I had the opportunity, I’d rip you off too, just on principle. Another thing you might want to consider is that the way the authorities keep the drug situation under control in Israel is by using a network of snitches. These are petty criminals who stay out of prison by ratting out other criminals. Thus, even if you do get your hands on drugs, you might be met with an unwanted interaction with the local constabulary a few moments after scoring. Afterwards, you will go to jail. In either case, you won’t get high.

Marijuana in Israel mostly sucks
A businessman/pothead friend of mine who occasionally visits Israel tells me that because of the relatively low quality of the weed in Israel, he has to smoke three times as much in order to get sufficiently high. After one week of this, his voice gets all scratchy and he develops a persistent cough. Do you really want to risk jail and deportation for a little skunk weed?

Ecstasy in Israel mostly isn’t
I’m sure you’ve read all the newspaper accounts involving Israeli drug kingpins flooding Europe and the US with high quality ecstasy. Perhaps you assumed that this drug would be readily and cheaply available throughout Israel. If so then maybe you ought to lay off the drugs a little given that all said Israelis are in the news because they have been arrested and their operations shut down. Anyone selling you Ecstasy in Israel is actually selling you something else. What that something else is, is anyone’s guess.

Hashish in Israel comes from terrorists
If it didn’t involve so many dead people, the story of how hash gets into Israel is kind of heartwarming. It is the only time Lebanese-based terrorists cooperate with Israelis in the furtherance of mutually beneficial transactions. The drug wholesalers approach the fence separating Israel from Lebanon and throw a pack of Hashish over it. The Israelis on the other side throw a pack of money back. It’s heartwarming because under different circumstances, these entrepreneurs would be killing each other. Not so heartwarming because the money is used to fund the Hezballah terrorist infrastructure in South Lebanon, paying for guns and rockets used to kill Israelis.

Opiates in Israel come from terrorists
The Poppies that are used to manufacture opiates are found mostly in Iran, Afghanistan and even in parts of the Sinai. Either way, by buying these types of drugs you are enriching terrorists, be they the Taliban, Al Qaeda militias or the Mullah led government of Mahmoud Ahmadinejad, all of whom wish to wipe Israel off the map in one way or another. Yes, that’s Israel the country whose taxpayers paid for half your free trip.

Getting arrested in Israel is the opposite of fun
Jails anywhere are not pleasant places and jails in Israel are particularly foul. Israel frowns on the illegal use of narcotics – if you manage to avoid jail time or a court appearance you will still be deported and barred from returning to Israel for up to 10 years or more. Not a big deal, until jack booted thugs start marching in your town and you have nowhere to go to. It could happen! I’m just saying…

Bottom Line
Your trip lasts only 10 days. It’s a fast paced, intense and immersive, once-in-a-lifetime experience. Drinking too much, let alone illegal drug use of any kind, will not enhance your experience at all. Drug use will detrimentally affect your experience and may detrimentally affect the experience of the group you’re travelling with as well. It will also eventually lead you to checking out sites like centers.org looking for treatment if you turn out to have some common sense. In fact, if you read this post in the hopes of figuring out how to score drugs in Israel while on Birthright you’re obviously a shallow, thoughtless and selfish prick. I strongly urge you not to apply at all. If you get caught using drugs, you will get kicked off the trip, sent home and Birthright Israel may bill you and your family for the expenses involved. That could be like… $6000! That’s a lot to pay in order to get high. So please, just stay at home until such time as you are mature enough to take a trip like this and make the most of it. As for the rest of you, please by all means apply. Please by all means come to Israel. We’d love to meet you! Just stay sober. For 10 days. How hard can that be???