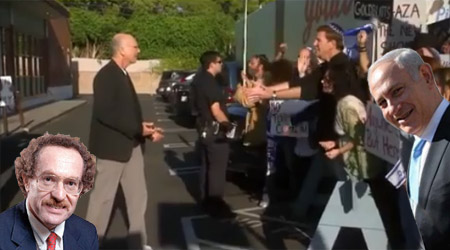 Well it’s like this, a reader sent me a link to an interview with Alan Dershowitz which appeared in The Current, the undergraduate journal of contemporary politics, culture, and Jewish affairs of Columbia University. Dershowitz is a well known Harvard Law professor, human rights advocate, criminal attorney, defender of Israel and channeler of Joan Peters. So this is what happened:

AD: …And let me tell you this: I recently sent a copy of â€œPalestinian Chicken,â€ that Larry David gave me, to Prime Minister Netanyahuâ€”with the suggestion that he invite Abbas over to watch it together. And maybe if they both get a good laugh, they can begin a negotiating process.

Current: Do you know if that happened?

AD: I don’t know, but I know that Netanyahu has received the DVD, and he was looking forward to watching it. So it may be that Larry David will not only win Emmys, but he may even qualify for the Nobel Peace Prize, if his episode could bring together Netanyahu and Abbas, and bring Abbas to the negotiating table.

Who knew Dershowitz enjoyed humor? But seriously, I have the episode on my hard drive. Bibi can come over and watch it whenever he likes as long as he brings some popcorn and drinks. I don’t have any fancy antique furniture but I do have a comfy sofa.

I know. Lame post. With the Egyptian elections taking place, missiles fired from Lebanon, Iranian nukes, Israeli democracy in flux etc. there have got to be more important things to write about but man, it gets a bit overwhelming, so I need fluff like this. Thanks for your patience.