Richard Silverstein is a Dolt 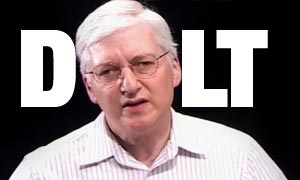 You can say what you will about Richard Silverstein, author of the grotesquely misnamed Tikun Olam Blog, but one thing is beyond denial: Richard Silverstein is a grossly unreliable source of information. Silverstein has recently achieved a small measure of notoriety thanks to his willingness to publish names and information that are under a publication ban in Israel. Fed information by Israeli sources, he has managed to bring to light stories that would not have otherwise been immediately published. Such instances are the only times that Silverstein receives any mainstream visibility, and like a $5 crack whore, he has become addicted to the rush. So addicted that he is willing to throw all caution to the wind in the hopes of scoring yet another “scoop” or “exclusive.”

This week revealed the inner workings of Silverstein’s typically shoddy “journalistic” methodology, as well as his amoral nastiness. It all begins with a clumsy attempt at a prank by one of Silverstein’s many detractors, the formerly anonymous “Aussie Dave” over at Israellycool. One of Dave’s posts contained a screen cap of Silverstein’s Facebook page. Over in the corner one could read the name “David Loeb” and a photo of said Loeb. Silverstein was contacted with the wonderful news that his nemesis, Aussie Dave may have inadvertently revealed his heretofore secret identity! In the past, Silverstein has asked his twitter followers to help him reveal Aussie Dave’s identity. Given the news that said identity had finally been revealed, Silverstein exclaimed to his source “Bless you. I’m forever indebted.” So excited was Silverstein at the prospect of revealing Dave’s identity, he totally neglected to use common sense or to even do the most basic research. David Loeb’s Facebook profile had only one friend. “Loeb’s” alleged address in Beit Shemesh doesn’t exist. Silverstein had never corresponded with his source “Yossi Nachas” before. But no matter. Silverstein ran with it, posted the false information and became the laughing stock of the blogosphere when Aussie Dave revealed his subterfuge.

Dave also revealed others who had been taken in – namely Jillian C. York, Director for International Freedom of Expression at the Electronic Frontier Foundation, an organization otherwise dedicated to protecting free speech online and protecting the rights of bloggers to remain anonymous. I don’t know how her attitude jibes with her employer’s statement that â€œthe free exchange of ideas on the Internet is driven in large part by the ability of Internet users to communicate anonymously…â€ but whatever… I am looking forward to any clarification from the EFF on this matter and the embarrassing statements of one of its directors. Also taken in was Max Blumenthal who really, really should have known better. Read about it all in Richard Silverstein Exposed and Exposing Richard Silverstein: The Day After.

Once again, allow me to reiterate, this is important because it demonstrates Silverstein’s shoddy methodology. He will believe practically anything that casts Israel in a negative light. For instance, and this is but one example, he declared that famed Jewish philosopher Martin Bubber lived in a house owned by Edward Said’s family, abandoned after they left Jerusalem in 1948. The picture painted was of a vengeful and spiteful Buber. The source? Jewish Palestine National Council member and convert to Islam Uri Davis. Just a little research would have shown this story to be bunk, but Silverstein ran it anyway and only retracted it and admitted his error three days later after repeated comments demonstrating that his information was completely fabricated. There was also the amazing story of the booby trapped Israeli drone purposely crashed in Lebanon and then used to explode a Hizbollah arms cache, or the stories citing the Mossad’s involvement, along with the MEK, in any number of explosions in Iran, all of these attributed to a retired Israeli politician and military officer, who remarkably still had access to top secret operational information.

It’s clear that anyone that lends credence to any of Silverstein’s stories is doing so at great risk to their credibility and reputation. There’s no need to even discuss his nonsensical political opinions, his lack of knowledge regarding life in Israel, his general ineptitude, his hypocrisy, deception and moral decrepitude, except to mention these in passing. The only other thing of note is that after being made a laughingstock, Silverstein seems to have gone nuts. With the help of his supporters, he did eventually find out who Aussie Dave really is and then wasted no time in revealing this information. Granted it wasn’t really hard to do – domain whois information is archived and it seems when israellycool.com was first registered, Dave did not do so anonymously. All you need to get to the archives is a credit card and five minutes. Brilliant journalistic research which Silverstein uses to justify schnorring laughably low amounts of money from his idiot supporters.

So I need to reiterate Dave’s question, written in a post in response to his unveiling: “I’d also be curious to hear what Jillian York, director for the Electronic Frontier Foundation (an organization dedicated to protecting free speech online and protecting the rights of bloggers to remain anonymous) and Silverstein supporter, has to say about this.” Is there some kind of ideological litmus test one has to pass in order to enjoy the support of the EFF?

In conclusion, I think it’s important to have a diversity of credible voices, especially when discussing an issue as complex and fraught with emotion as the Israel-Palestine conflict. If you want to visit a web site with a more critical perspective on Israel, please don’t waste your time at Richard Silverstein’s pathetic blog. Might I suggest you visit the 972Mag instead. There you will find stories written by actual journalists who actually have real knowledge of Israel. I don’t agree with their editorial stance but they are professionals who care about their reputations and their site is mostly free of the sort of vitriol that one typically finds on Tikun Olam. Now they seem to have banned [one of our writers] from posting there but their “censorship” is nothing close to what one finds on Silverstein’s blog where nary a critical opinion is voiced that doesn’t conclude with a threat to ban as well as a nasty insult or two. Silverstein also does not see fit to link to them so that’s as good a seal of approval as one can ask for – one wonders if this is a result of jealousy/envy (many commenters have moved on from Silverstein’s blog to 972) or anger that they didn’t invite the laughably self styled eminence grise of the Jewish “progressive” blog world to join them or that Larry Derfner, who tried to co-author a blog with Silverstein before finding out how insufferable he is, writes for them – but you get my point. Richard Silverstein is a joke.

Shavuah Tov Aussie Dave, send my best to your wife and kids.

UPDATE: Richard Silverstein is also a liar and a hypocrite!
Yeah. I know. Shocking right? Check out this comment thread on richardsilverstein.com:

Richard Silverstein says:
December 31, 2011 at 5:08 PM
No actually there is no picture of David Lange’s children on this site. In fact I cropped them from his photo because I didn’t want to invade their privacy. It was Lange in actuality who displayed the uncropped picture of himself and his children. So I presume you’ll take yr righteous indignation & spew it on him for displaying his own children online.
And while you’re at it you can add David Abitbol who displayed a picture of my children at his blog. When you’ve expended all that indignation in the proper places would you report back here on what you did & how they responded to you?
And as for making you sick. Sorry for yr indigestion, but imagine how sick I must feel when I have to read misdirected poison like yours.

Now watch what happens when he is confronted with the falseness of his accusation against me:

Steve says:
January 1, 2012 at 12:50 AM
I remember that incident. The photo Abitbol used had your children completely cropped out. You did to Lange exactly what Abitbol did to you. Or, did you completely forget that fact? All the photo had was a little green football bouncing off your head. Does that help refresh your memory?

Richard Silverstein says:
January 1, 2012 at 1:14 AM
Perhaps you missed the photo another blogging pal of Lange and Abitbol featuring my son & myself claiming our cookie making was preparing terror bombs for Israel. Did you miss that one?

Steve says:
January 1, 2012 at 1:25 AM
So, are you admitting that what you did to Lange is exactly what Abitbol did to you, namely use a picture of you and your children, with your children cropped out?

Richard Silverstein says:
January 1, 2012 at 1:37 AM
No, it’s not the same. Abitbol used my picture with the logo of Little Green Footballs, a green football bouncing off my head. I have never doctored any pictures I displayed of either of them to gloat or insult them.

Steve says:
January 1, 2012 at 1:29 AM
Sorry, I hit submit too early.
As a follow up to my first question, why is it OK for you to do that to Lange but not OK for Abitbol to do that to you?
As for the cookie making photo, didn’t you admit that Abitbol had nothing to do with it and that it did not appear on his site?

Richard Silverstein says:
January 1, 2012 at 1:38 AM
We’re done with this line of questioning. MOve on to another subject or you’ll be moved on yourself.

Confronted with the lie, and his own patent hypocrisy, Silverstein simply threatens to ban the commenter. Par for the course for Richard Silverstein!

Once on the Web site, I read his latest post condemning Haredim for dressing their children up as Jewish concentration camp inmates in a recent protest. In that post Silverstein reveals his patent ignorance by conflating Haredim with Dati Leumi (National Religious) Jews with Kahanists. In his understanding, these three very different streams of Orthodox Judaism are one and the same. Anyone that knows even the smallest bit about the Israeli religious map knows that such an assertion is ridiculous and does not at all reflect reality. But what can one expect from a person driven by malice who hasn’t been to Israel in over a decade? One can expect ignorance and venom and Silverstein delivers in spades!