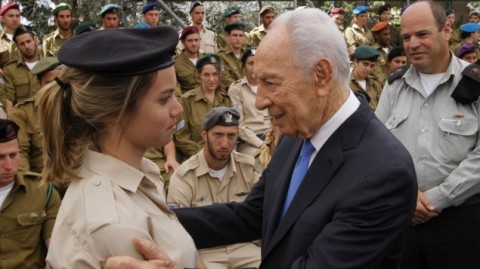 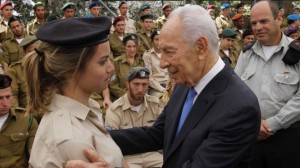 By sheer accident I came across this photo. It seems like Shimon Peres is speaking to an attractive young female soldier. The photo stopped me because she isn’t smiling as he speaks to her and I found that odd. Normally, this would be a scenario where some excelling soldier is given the honor of meeting Israel’s President and he says a few warm words and the soldier smiles and moves on. So why wasn’t she smiling in the photo. In fact, looking at the soldiers in the background, I noted they aren’t smiling either.

Then I saw the caption. It reads:

At a rehearsal for the Independence Day ceremony to take place at the President’s Residence Thursday in Jerusalem, Shimon Peres speaks to an IDF soldier who lost her parents and three of her siblings in a terrorist attack. (photo credit: Miriam Alster/Flash90)

I don’t know her name or who her family is or where and how they were killed. But reading that caption just took the wind out of my sails for a while.