This is Jewlicious, and We Support 1 Minute of Silence for the Munich 11 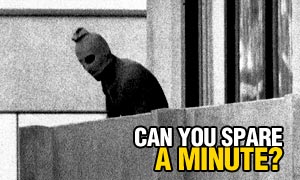 At 4:30 am on September 5th, 1972, a group of Palestinian Terrorists made their way to the Olympic Village in Munich, to the building housing some members of the Israeli Olympic team. There they shot two of the team members and kidnapped 9 more. By the time the incident ended, after a horribly bungled German rescue attempt, all remaining 9 members of the team were dead. Despite the tragedy, the games, after a brief suspension, continued. At the memorial service held on September 6th and attended by 80,000 people, IOC President Avery Brundage made little reference to the murdered athletes during his speech. During the memorial service, the Olympic Flag was flown at half-mast, along with the flags of most of the other competing countries. Ten Arab nations objected to their flags being lowered to honor murdered Israelis; their flags were restored to the tops of their flagpoles almost immediately.

There have been calls for a one minute moment of silence at this year’s Olympics being held in London given that it’s the 40th anniversary of the Munich massacre. Thus far, the IOC has unequivocally rejected all attempts to make a commemoration during the opening ceremonies of the games. I guess they don’t want to ruin the party and they claim that they have already commemorated plenty, thank you:

The International Olympic Committee officially rejected a request to hold a moment of silence for the Munich 11 at the London Olympics this summer. “The IOC has officially paid tribute to the memory of the athletes on several occasions,” IOC President Jacques Rogge wrote in a letter dated May 15. “Within the Olympic family, the memory of the victims of the terrible massacre in Munich in 1972 will never fade away.â€

In other words, fuck off.

This hasn’t deterred folks yet, and in particular this group of students from the Catholic University who produced the video above. You can learn more about their campaign by visiting their facebook page, following them on twitter, or signing their online petition. Also, you can share this video with your friends.