Get Off Your Butt! It’s Birthright Registration Time. Again. 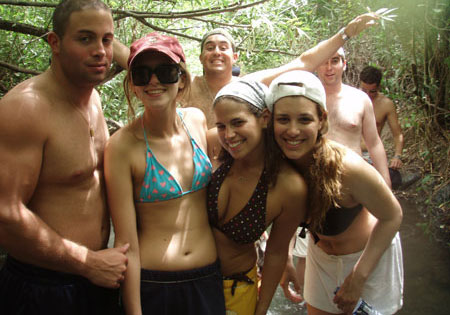 I was totally caught off guard by the fact that it’s Birthright Israel registration season. I mean between feeling sad about the 12th anniversary of 9/11 and recovering from a Rosh Hashana-based food induced coma, sorry! It slipped my mind! But then again, I’m not a young Jew between the ages of 18-26 who has never been to Israel before on a peer based trip. What the hell – I live in Israel! And I’ve lead like what, a dozen Birthright Israel trips? But maybe you or someone you know qualifies for this free trip of a lifetime. So… you know. Get on it. Get off your butt and visit BirthrightIsrael.com and get the process started.

Speaking of getting off your butt… Lena Dunham, creator of Girls and one of the top 5 most newsworthy Jews in 2012 according to the Forward 50 visited Israel for the first time last year as a guest of the Jerusalem Film Festival. In her upcoming book, Not That Kind of Girl: A Young Woman Tells You What She’s Learned, a collection of biographical essays for which Random House paid her $3.5 million, Dunham talks about her trip and why she had never been before:

Israel was a place I didn’t even want to go in the first place. All my associations were with birthright trips and bad sweatpants and teens carrying their own pillows on the plane. I quit Hebrew school after I wasn’t given the role of Esther in the class play, and that was pretty much the extent of my desire to explore my Jewish heritage. But when the Jerusalem film festival offered me an all-expenses paid journey to the homeland, my childhood best friend Isabel (one eighth Jewish and eight eighths adventuresome) would not allow me to turn it down.

Had she gone on Birthright prior to her JFF trip, she would have known that it doesn’t have to be all about “bad sweatpants and teens carrying their own pillows on the plane.” Maybe she would have even had the gumption to actually walk into Yad Vashem and not just stand outside because “I hate stuff like that.” Trust me, we ALL hate stuff like that. Genocide. Yuck. At least she managed to appreciate somethings about Israel: “Isabel (Dunham’s travel companion) described the best of the nation’s hummus as effervescent. She said that was really the only word for it. And she was right. All their hummus makes ours taste like insulation on crackers.”

But yeah. Shoulda gone on Birthright Lena. And if sweatpants and pillows aren’t your thing, might I suggest a really active trip? One that has all the usual Birthright elements – Jerusalem, Tel Aviv, yes Yad Vashem too etc. etc. – but also really get to know the land thanks to a series of very active trip components including snorkeling, hiking, rappelling – just reading Hi-Gear’s itinerary makes me sweat. When I spoke to a Yael Adventures rep she assured me this would be like a physical and intellectual Boot Camp. Sounds like a perfect antidote to all that enforced Winter indoor-ish-ness. Is that even a word? The point is one day you could be sitting at home eating Doritos and stalking your exes on Facebook while it freezes outside, and the next day you could be walking up the side of a mountain, following in the ancient footsteps of your ancestors, red clay in between your toes and fingernails, the hot morning sun beating on your head (Wear a hat!! Drink water!!). And yes, you can recover afterward – we do have Doritos here in Israel. And Facebook.

Seriously. Get outta town. Time to go to Israel yo! And don’t forget to read our always relevant Unofficial 13 Dos and Donts of Birthright Israel – with links to our VERY unofficial Birthright guide to Sex and Drugs.