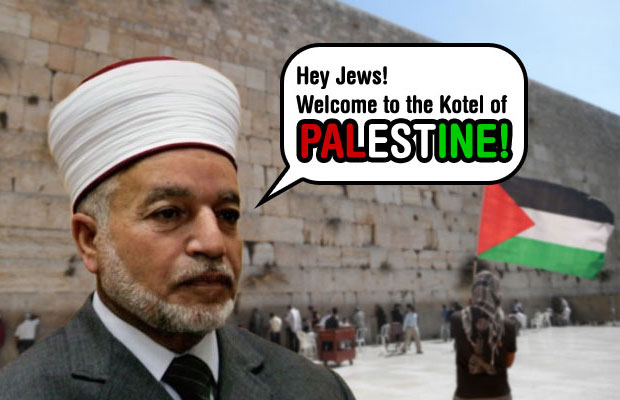 There will not be peace without putting an end to the Israeli occupation that began in 1967. Every piece of land that Israel conquered then belongs to the Palestinians … all the holy places, including the Aksa mosque and the Western Wall [rightfully belong to the Palestinian Authority and must be returned as well]

And what about Jewish religious services at said Jewish holy places? Habbash said that politics and religion are two separate things and that there will be no religious limitations. “Ahalan Wasahalan! [Welcome, Welcome!] All may worship as they wish under the Palestinian Authority,” he exclaimed.

This position should of course come as no surprise. In 2000, then Israeli Prime Minister Ehud Barak offered the PLO Chairman Yasser Arafat sovereignty over the entire Old-City of Jerusalem, save the Jewish Quarter and the Kotel. The Palestinians would even control the land on the Temple Mount (Judaism’s actual holiest site) abutting the Western Wall. Arafat refused even this massive concession as inadequate, so there’s no surprise there. When anti-Israel activists talk about occupied territory, they include the Western Wall, the Temple Mount and many holy Jewish graves and sites. Israel is hesitant to give these up because the memory of the previous Arab occupation of these Jewish sites remains fresh in our collective minds – to wit, between 1948 and 1967 when Jordan controlled the Old City, it remained judenrein – no Jews were allowed to worship anywhere ever, despite an agreement to the contrary in the Armistice Agreement. Prior to 1948 when the British controlled the Kotel, one could get arrested and jailed for merely blowing a Shofar!

But seriously? What wouldn’t we do for peace, right? So if the Palestine Authority takes over the Kotel and the Jewish Quarter, what might happen? Maybe the Kotel Plaza will become a residential neighborhood again, populated by former residents their descendants of the Mughrabi neighborhood? That’ll mean far less room for dancing and singing at the beginning of Kabalat Shabbat and less parading Yeshiva boys in their crisp white shirts. OK. It would mean less room for everything of course because the Mughrabi neighborhood went almost all the way up to the Wall leaving only a narrow alley for Jewish worshipers. I mean I can see all kinds of problems, but what about the good things that would happen?

Like? Like no more overpriced food and drinks in the Jewish Quarter. And especially, good hummus near the Kotel! Come on. Think about it. Would it be so bad??