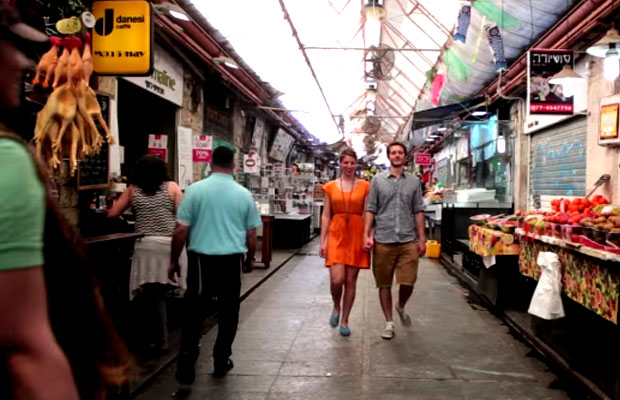 Jerusalem Day, or Yom Yerushalayim (×™×•× ×™×¨×•×©×œ×™×), commemorates Jerusalem’s reunification in 1967. This day begins on the 28th day of the month of Iyyar in the Hebrew calendar or, this year on Wednesday, May 28. A wide range of events take place in celebration of this day. Synagogue services include the recitation of the Hallel prayer for praise and thanksgiving, street parades, parties, singing and dancing and the inevitable lectures on the history and future of Jerusalem. In Jerusalem, a public reception is held by the mayor and state ceremonies and memorial services for those who died in the Six-Day War are also held. In Israel, some people mark the occasion by traveling or even hiking to Jerusalem.

Ever since the advent of viral videos, we’ve been witness to a spate of Jerusalem centered videos – some good, some bad. To the “great” list we can now add a video produced by Beit Avichai, a cultural center and music venue built by the Avichai Foundation. The Avichai Foundation was endowed by Wall Street Billionaire Zalman Bernstein, founder of the investment management firm Sanford Bernstein. The Foundation is committed to the perpetuation of the Jewish people, Judaism, and the centrality of the State of Israel to the Jewish people.

The video is meant to promote Beit Avichai’s wide ranging celebrations of Jerusalem taking place on May 22nd – if you’re in town, check it out here, otherwise, just sit back and enjoy the video!

Or, while you’re at it, you may actually want to contemplate the actual centrality of the State of Israel to the Jewish people. Certainly that’s not an issue in Israel, for obvious reasons. But in America, home to the largest or second largest group of Jews in the world, Israel, let alone Jerusalem, let alone Judaism, doesn’t seem to be of such central importance. Overall, 57% of American Jews have never been to Israel according to our friends at Pew Research. 94% of American Jews state that they are proud to be Jewish, and 69% say that they are very or somewhat attached to Israel. 75% claim a strong sense of belonging to the Jewish people. That having been said, among Jews between the ages of 18-49, 38%-39% claim little or no emotional attachment to Israel and among unaffiliated Jews, that number rises to 51%. What does that say to the notion of Jewish Peoplehood? With 58% of Jews married between 2005-2013 marrying outside the faith, and 3/4 of those not even raising their children as Jews, do we in fact have anything in common especially since those numbers are only trending up? Looks to me like the Avichai Foundation has its work cut out for it. Good luck and happy Jerusalem Day – that is if you care about Jerusalem at all.