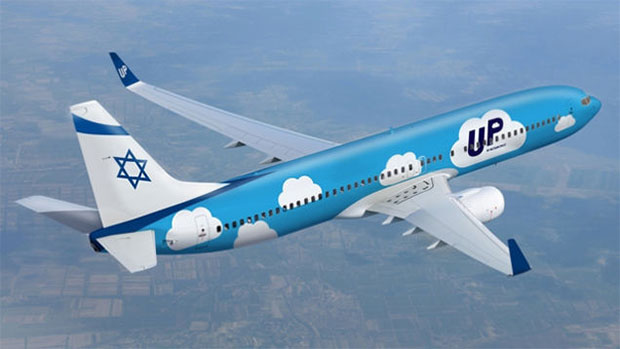 EL AL UP’s new safety video has garnered a lot of press and attention for the fledgling discount airline, receiving (not always flattering) coverage from the Times of Israel, the Jerusalem Post, NPR and more. Most of the reports noted that EL AL was jumping on the Funky In Flight Video train, joining airlines like Delta, Virgin and Air New Zealand with videos that try to capture passengers’ attention by entertaining them. Ad Week had this to say about UP’s video:

Get down with the latest in-flight jam, titled “Up,” created for a new budget airline also called UP, owned by Israel’s El Al. The jaunty boogie takes a five-minute scenic tour through some great moments in rock history, including Devo, Robert Palmer and Ziggy Stardust.

To that list of influences, one might want to add Soul Train and Grand Master Flash and some contemporary autotune techniques as well. Except for one small thing. I don’t think the “creators” of this video know Ziggy Stardust from Ziggy Marley, or David Bowie from David Beckham or Devo from Krembo. I think they had exactly one influence and one influence only and that would be the video for D.I.S.C.O. by Ivri Lider lead Israeli band TYP – The Young Professionals. It’s not even an homage so much as it is a straight up rip-off. Not sure I’m right? Here. Watch both videos and then tell me I’m wrong. This is EL AL’s video:

And this is the vid by TYP:

There are so many similarities that I simply created an animated GIF for you to save you time – and these range from the initial Robert Palmer intro (same amount of band members, same square platforms, same choreography and instruments), same peach colored pantsuits (though the EL AL version has the women wearing full length dresses as they are less gay and less likely to offend religious customers), same skin tight body suits, same hand clapping, similar makeup styles etc. It boggles the mind that some greedy or clueless or both Tel-Aviv ad firm spent a whole bunch of EL AL’s cash to make this monstrosity and then couldn’t even be bothered to be at least a little creative. I mean why is the lead singer wearing a faux hawk? Because that’s the fave hairstyle of the moment among high school hooligans in Israel? Who wants safety advice from a hooligan? Only someone totally clueless and lazy could come up with something this bad. Hopefully the new airline will not be as uh… derivative and uninspired.

UP is a subsidiary of El Al, Israel’s flag-carrier airline. UP flies Boeing 737-800s and is based in Tel Aviv with 52 discounted flights per week to Berlin, Kiev, Prague, Budapest and Larnaca. Good luck guys though really? Someone should tell Ivri Lider (the creator of TYP) and Uriel Yekutiel (the mustache guy in the TYP video). I’d be pissed if I was them.