Netanyahu Goes on an Anti-Smartphone Rampage 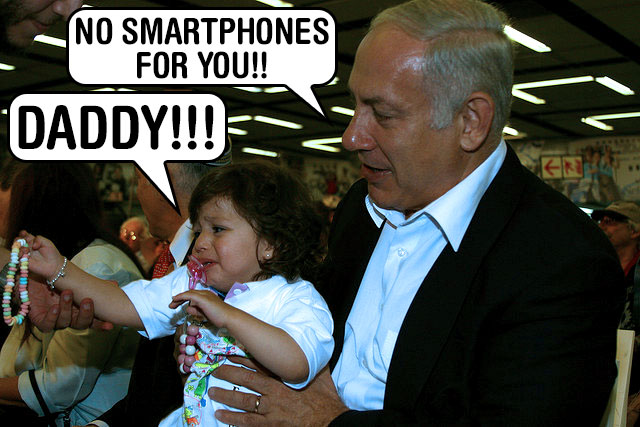 Last week during a photo and interview session with the foreign press in Jerusalem, Israeli PM Benjamin Netanyahu went on a bit of an anti-smartphone rampage. At first he wondered why the assembled photographers needed to take so many photos. And then he went on a “kids these days” tirade:

An off camera voice opines “if you did not take a picture, it’s as if you didn’t live…” To which Netanyahu concludes “I’m the only one here without all these electronic devices, I’m a free man, and you all are slaves … You are slaves!”

Viber and Waze are only two of dozens if not hundreds of mobile apps helping to fuel Israel’s current tech boom – with talk of Israel being in the midst of a bubble that is set to burst soon, the PM adopting a Luddite position might not be such a good idea. And yes, maybe we are “slaves” to our devices but we can’t all have the staff a head of state has that does everything for him, I mean can you imagine Netanyahu ordering a cab on GetTaxi? That having been said, I bet that if Golda Meir had a smart phone, she’d for sure use Moovit to check for the next bus that would take her to the Shuk. Oh how our leadership has changed. Or maybe Sarah stressed him out that day. Who knows.