Sex in a Bomb Shelter 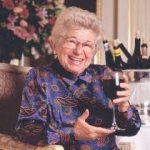 Amid the missiles, attacks, sirens, injuries and deaths, over six hundred young men and women gathered on Wednesday evening to listen to Dr. Ruth Westheimer at a Tel Aviv International Salon at Hangar 11, Tel Aviv Namal.

Dr. Ruth is an American sex therapist, media personality, and author. The New York Times described her as a “Sorbonne-trained psychologist who became a kind of cultural icon in the 1980s.… She ushered in the new age of freer, franker talk about sex on radio and/ television, and was endlessly parodied for her limitless enthusiasm and for having an accent only a psychologist could have.” She is the author of over 35 books, both practical and scholarly.

She was visiting Israel, having just been on safari in Africa (searching for lions having sexual intercourse). She recently tweeted, “Things here in Israel are a little bit dicey but as former sniper for the Haganah nothing that makes me very nervous” and “Life goes on here in Israel despite the rockets raining on us. Of course I was seriously wounded in ’48 ignoring air raid siren!”

Her talk in Tel Aviv ranged from issues of sex and sexuality to those of fantasy and vibrators, similar to those available from somewhere like billion dollar babes.

Later, she was asked what is the best position for sex in a miklat (a bomb shelter, safe room). She replied, “I would say never in the miklat if there are other people in the room, however, if it is a private miklat, and if you are one of those people who can get an erection or reach orgasm during a siren, then have a great time. I’m sure people would enjoy supplements in that siutation similar to what you can find if you visit this site to enjoy their time in their miklat even more.”