Oh BuzzFeed. Here we go again with the spectacle of apparently clueless Americans trying something new and ethnic. I’d understand the cluelessness if the tasting panel was made up of bumpkins from like, Iowa or something. But these folks are from New York, probably the most cosmopolitan city in the world where one can get a Milky on St. Mark’s street after chugging down a decent plate of hummus across the street. But whatever. In this video BuzzFeed prepares a selection of Middle Eastern treats that are popular in Israel: Pita with Zaatar, Cheese Borekas, Sabikh and Shakshouka. BuzzFeed’s previous foray into Israeli food was a fun romp that featured snack food like Milky, Pop-Rock Chocolate, Bamba, Bisli and Pesek Z’man. These snack foods have a mostly unimpeachable Israeli pedigree whereas the Israeli food featured in this video have their origins in the Middle East. The snack food video nonetheless attracted its fair share of negative, anti-Israel comments like “It’s great snacks to eat after bombing kids” or “Excuse me but, Israel isn’t a country. And it’s will never be” or “How to brainwash Americans into loving Zionism! With food” or “Americans try snacks created by murderers?” or “it was that [Palestine] before isreal killed the childrens and Brutally expelled, that is the proof that I Jewish is evil i think that is why Hitler killed them.”

Those are just some snack related bon mots. You can imagine the clever quips generated by the juxtaposition of Israel and the Middle East – as if Israelis could ever be an intrinsic part of the region! Never mind that most Israelis are Sephardic and thus actually from the Middle East. No. This is yet another example of Zionist cultural misappropriation of Palestinian ethnic touchstones! Of course the comments don’t disappoint, both on Facebook – “IT’S ALL PALESTINIAN FOOD. They stole our land and our culture. I thought you were better than this Buzzfeed” or “There is nothing called “Israeli food” Israeli zionist jews are from Europe,they should go back to Europe and leave Palestine alone!” or “All these foods are Arabic foods even the culture they steal for god sake” or “I’d rather starve than eat food from a nation bred by genocide” or “Seems like the israelis have a thing for stealing.. From food to whole nations.” And on and on it goes.

But hold on a sec. Is this food actually Palestinian? Borekas are Turkish, Shakshuka is North African, Sabich is Jewish Iraqi and even Za’atar, while Arabic/Middle Eastern, has a long tradition of use by Jews that predates Islam. So yeah. Get over it. Now can we just get back to laughing at Americans being silly while eating what looks like terrible versions of food we all, Jews and Arabs, love? Thanks.

The butthurt wasn’t only felt by clueless Israel haters. It was also felt by Israelis who were offended by the perceived quality of the food being sampled. For instance, shakshuka is usually served piping hot in a pan, with bread on the side. Sabich is made with soft pita bread and freshly deep fried eggplant, as aptly demonstrated below by my friends at the neighborhood Sabich joint, Aricha Sabich (check them out, the Sabich is delicious!) 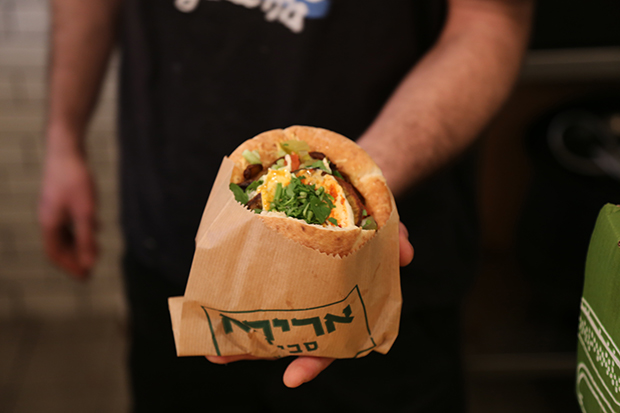 As for Borekas? They are usually smaller (unless you get the meal-sized version) and are best when fresh. They also come with a number of different flavors from cheese, mushroom and spinach to pizza. Below are some yummy cheese Borekas from the Screaming Lady Borekas joint in the Jerusalem Shuk: 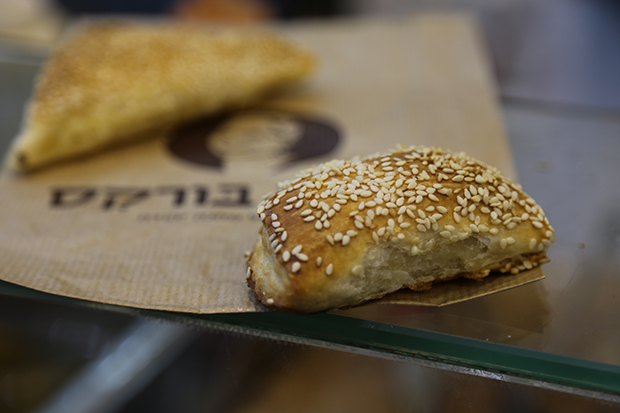 And finally, Zaatar with pita. The ones sold in my ‘hood at Achim Chavah on Agripas are sold using Iraqi pitas which are larger but less soft than traditional pitas. Fresh out of the oven and drizzled with olive oil, this pita with zaatar is beyond delicious. Here’s what it looks like: 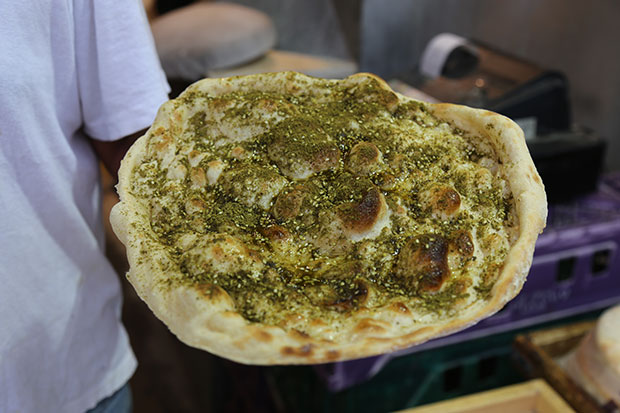 All these places and more are located within 5-minutes walking distance from my home. In Israel. In West Jerusalem. Doesn’t get more Israeli than that!