Remember My Name at AACI 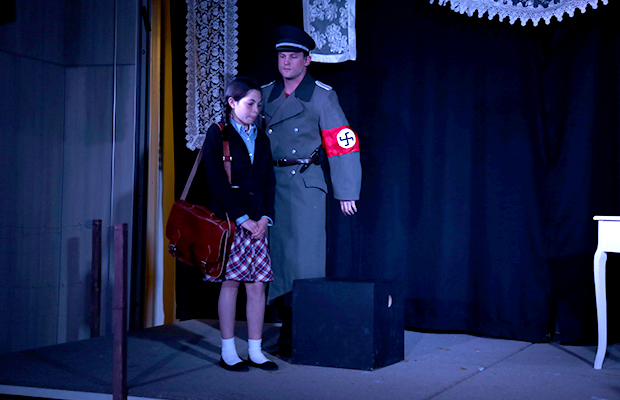 The AACI is of course the Association of Americans and Canadians in Israel. Among the many services they provide to English speaking new immigrants to Israel, is one whereby they host the J-Town Theater Project – one of the very few English speaking community theaters in Jerusalem. Now, this isn’t hosted in some posh locale. There are no fancy seats, sets are always very basic and the cast and crew are volunteers and mostly amateurs (though some have had professional experience). And yet… well, and yet they manage to produce a regular slew of performances and people keep coming back for more.

Last night, as a commemoration of Yom Hashoah, the J-Town Theater Project put on a play called Remember my Name. Written by Joanna Halpert Kraus and directed by Raphael Poch, it’s the story of a Jewish Family in Marseille torn apart by the Nazi invasion of France during World War II. They send away their only daughter to a remote mountain village with false papers, a new name and a new identity, where she is cared for by the village priest, a school teacher and a local woman. While riding out the war, the little girl has to avoid the attention of the local Nazi commander as well as meddlesome anti-Semitic French collaborators.

All this takes place in the spartan confines of the J-Town playhouse. However, the overall performance really transcended the locale. Yasmin Berg, who plays Rachel Simone/Madeleine Petit truly anchored the show with a stellar performance as the little Jewish girl. Bakol Ruben Gellar, playing Madame Barbiere, was pitch perfect as Madeleine’s reluctant hostess. After the show, I had to remind myself that Racheli Wacks, who played Yvette Renaud the meddlesome collaborator, was not in fact a totally loathsome person in real life. The last time I saw Yedidya Fraiman on stage, he played a Rabbi in Division Avenue. This time he played the kindly priest, Pére Antoine and, let’s just say, he does men of the cloth really well. In fact, the entire cast put on a great performance that left my date in tears at several dramatic points during the show. The cast managed to transcend our immediate setting, and isn’t that what quality theater is all about?

Remember my Name is an ideal play to put on for Yom Hashoah and, given recent events in France, the timing is particularly auspicious. There are 7 more performances scheduled between now and May 7th, tickets are only 50 nis for AACI Members and soldiers and 60 nis for everyone else. You can get more information from the J-Town Playhouse Facebook page.