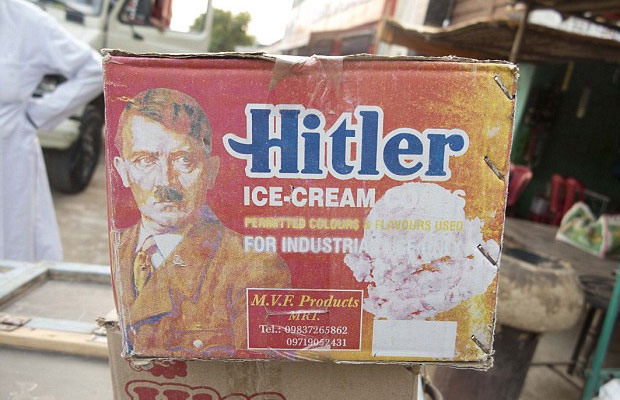 Right now, it’s really hot in India. With temperatures in Calcutta in the high 90s – or mid-thirties if you’re metric, Indians are scrambling to find relief any way they can. And when one thinks relief from scorching heat, one can’t help but think of cool, creamy, refreshing ice-cream. And in India, we’re specifically talking Hitler ice cream! That’s right. Luckily it’s not Hitler flavored ice cream – what would that even taste like? Probably some combination of uncontrollable chronic flatulence, Zyklon B, genocide and megalomania. But yeah, no. It’s not Hitler flavored ice cream – it’s Hitler branded ice cream. The Daily Mail reports: 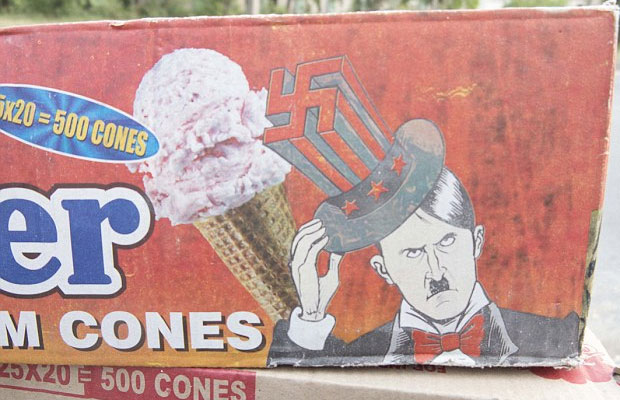 In some instances he appears in cartoon form in a Swastika-shaped top hat with a jaunty red bowtie, which is somewhat at odds with his furious expression… Other more sombre packages depict him in full military regalia with almost photographic realism, looking very out of place next to an ice cream that’s almost as big as he is… A lack of Holocaust education in India means that people on the sub-continent know little about the Nazi leader, and consequently Hitler-themed pubs and restaurants are not viewed with outrage.

Back in Germany, the incongruous use of the murderous, but child-loving despot, raised quite a bit of a, uh… furor (see what I did there? Heh…):

One spectator in Berlin, said: ‘There is taste and there is tastelessness. The people of India should be made aware of the terrible crimes committed by him.’
German newspaper Bild labelled the ice cream cones a ‘macabre publicity stunt’, while several Twitter users branded them ‘tasteless!’ 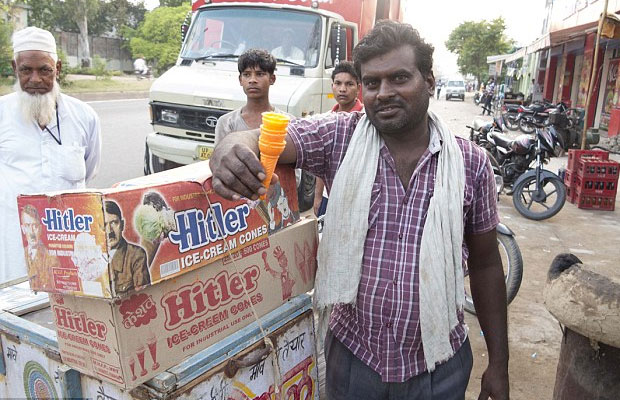 There’s just nothing more to say really. I mean I get it, people in many countries, including Indians, get little education about Hitler. But it doesn’t explain the continued use of Hitler as a branding strategy for all kinds of things. How come we don’t see Stalin brand candies? Pol Pot theme parks? Mussolini pizzeria? Jeffrey Dahmer Sushi? The only plausible explanation is that as a failed artist, Hitler still retained an advanced visual sense. As such, Nazi imagery continues to be very evocative. Combine that with historical ignorance and what you are left with is a dude that just looks strong, tough and a bad ass who will blitzkreig the cold! Not that this helped him on the Russian Front… So yeah. Hitler Ice Cream – boo!