Next to Normal in Jerusalem 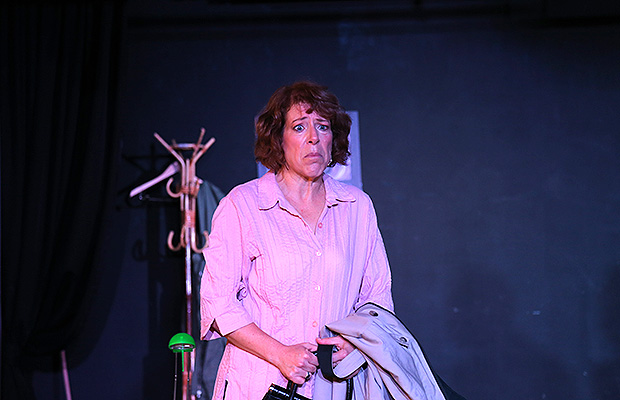 No. This isn’t a commentary on the current situation in crazy, stab-happy Jerusalem. Next to Normal is the latest production by the J-Town Playhouse at the AACI. But it’s like they say, the show must go on! Some might think that venturing out for some theatrical entertainment under the current circumstances is crazy. Well, staying home and missing this musical that has won Tony Awards and a Pulitzer would be truly crazy.

Next to Normal, written by Brian Yorkey, is a rock-opera about a family dealing with its mother’s bipolar disorder. Madness is an unusual topic for a musical but its success is reflective of the universal themes explored – overcoming seemingly insurmountable obstacles and the search for happiness. The cast is made up of talented and experienced Jerusalem anglos.

Singer songwriter and veteran performer, Sandy Cash, plays Diana Goodman, the aforementioned mother. Evan Kent, who in real life is a Cantor and teacher at Hebrew Union College, plays Diana’s stoic and loving husband. Coren Feldman and Tal Schwerd play the son and daughter, C.B. Davies is the daughter’s boyfriend and Howard Metz portrays a succession of therapists. The cast is directed by Layla Schwartz and the orchestra is directed by Musical Director Haim Tukachinsky.

As you all know, I’m not really a theater critic. I’m not schooled in the nuances of staging and I am not possessed of a great body of dramatic experience. The only things I can discern with any effectiveness is whether I was entertained or not. Suffice it to say that I was indeed both entertained and impressed. The band was pitch perfect and obviously very talented. And the cast?, It’s not unusual in many theatrical productions, for certain cast members to stand out. In this production, everyone stood out. Sandy Cash as the mother anchored the play and was perfectly crazy and tortured throughout. Evan Kent as the father performed his theatrical duties with aplomb – you could almost feel the burden his character was bearing. Son Coren Feldman spent most of the performance quiet and understated but his perfect demeanor throughout really underscored many of the themes explored. Tal Schwerd transcended her role with a very nuanced and almost personal performance. I know C.B. Davies in real life. I’ve hung out with him on several occasions, and yet he was perfectly convincing as the supportive, stoner boyfriend. Therapist Howard Metz was at times Faustian and at times cynical and disinterested, spanning the full scope of ineffective mental health professionals.

And they did this all while singing live! Big props have to go out to the directorial team of Schwartz and Tukachinsky. I don’t know how they did it but they sure did it well. The cast and crew were just in total sync with each other.

Or maybe it’s just a Jerusalem thing? Jerusalem is in fact the only city in the world with its own psychotic disorder (Jerusalem Syndrome). And we are in the midst of a terror wave – who goes out to the theater under these circumstances? Maybe the cast and crew were so good because they are literally surrounded by crazy all day, every day? Who leaves a comfortable and easy life in the diaspora to come here? Who even tries to build a vibrant, Western nation while surrounded by Hezbollah, ISIS and Hamas? Yeah. We do. If you live in Jerusalem, go see Next to Normal. You’ll be able to relate. If you don’t live here, go see it too and maybe you’ll understand us a bit better.

You can see Next to Normal tonight, October 29 and 30 and November 4 and 5 at 8pm; Saturday Night performances will be held on October 31, and November 7 at 8:30 PM. Tickets are 80 NIS regular price or 60 NIS for AACI members, students, soldiers and national service volunteers. Tickets can be ordered by calling 02-566-1181 or by visiting www.aaci.org.il.