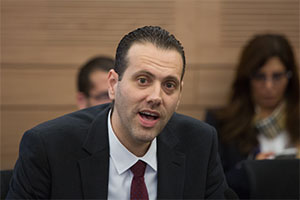 Miki Zohar is an Israeli Knesset member with the Likud party. He is often seen in parliament sporting his trademark 5 o’clock shadow and despite his contention that you have to be delusional not to believe in God, he never wears a kippah. Miki is a proud son of Kiryat Gat, a rural development town in the northern Negev. Thus after making a proposal to ban all commercial activity on the Sabbath in Israel, he suggested that another famous person from Kiryat Gat, pop star Ninet Tayeb, supported his proposed legislation. Apparently, that wasn’t exactly true and Ninet responded on her Facebook page as follows:

If there’s one thing that really infuriates me, it’s lies, particularly by people who claim to know me and what I’m thinking and speak on my behalf … Dearest Miki Zohar, the fact that you are from [my hometown of] Kiryat Gat doesn’t automatically make me an enthusiastic supporter of yours … And, just for the record, I’m not. My god is not your god, and I am asking that you refrain from speaking in my name on any panel. With thanks, the girl from Kiryat Gat.

Zohar responded with an attempted dig at Ninet who left Kiryat Gat and moved to Tel Aviv:

Hi, Ninet, it’s me, Miki, the boy who was born in Kiryat Gat and never left it … I see you’ve taken it quite hard the fact that I thought you were in favor of a day of rest for everyone. I understand that it’s not the most popular position in your milieu to be a believer, but that’s alright. It’s your right to conduct your life differently since we are in a democratic country, even though it’s a Jewish and a democratic country… By the way, it’s important to emphasize that all of us have the same God, the one who gave us this land, and everyone believes in it in his or her own way … I’m one of those that is proud of their belief.

Well… that only pissed off Ninet even more who layed Zohar low with a scathing rebuke:

The nerve of you! Who are you to decide what constitutes belief and who believes [in God] more or less? My belief in God is clean and complete, and I sleep well at night. I am against the imposition of religion, and I don’t think I have the right to decide who will and will not keep the Sabbath. Whoever wants to rest on the Sabbath is welcome to do so, and whoever doesn’t, won’t. The right to choose belongs to us all, and coercion only pushes people further away from each other, the opposite of what you claim to represent.

I really enjoy the Sabbath but I certainly don’t believe in the wisdom of enforcing religious values. I believe in Israel as the Jewish State but Israel is currently not a Theocracy. Apparently, it isn’t just Ninet Tayeb that thinks that his proposal is unwise – Prime Minister Netanyahu intervened to postpone the planned vote and members of his own party, as well as members of Likud’s coalition partner Kulanu, threatened to vote against it.

Zohar eventually withdrew the proposal. That’s how stupid it was.

See, the separation of Church and State is a hallmark of western democracy. In Israel, such a separation is not so clear cut. For instance, Jews are allowed to freely immigrate to Israel. While that goes against the notion of separating religion from statecraft, it was necessitated not just by the Holocaust, but also by an almost eternal characteristic of history whereby Jews, throughout time, were victimized by the world for being Jews. As such, Israel can maintain it’s status as a Western Democracy, if it limits its incursions into religious belief, practice and identity, as much as possible. Zohar’s stupid proposed law however, crossed a line, so much so that even his fellow Likud buddies had to slap him down.