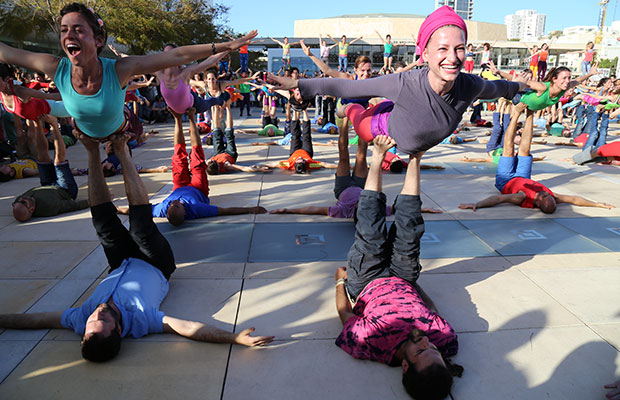 Acroyoga is a super fun combination of yoga and acrobatics that has taken the world by storm. Israel has a very healthy Acroyoga community, meeting informally in parks across the country and formally at weekend and holiday get-togethers. Over the last couple of months, a group of acroyogis prepared for and organized a massive Acroyoga flashmob at the Habima Square in Tel-Aviv. They met at a practice facility in Schunat Hatikva to work on their moves and choreography and spent countless hours doing so. My wife Ayo shlepped there every Saturday night and spent hours preparing for the fateful day. About a month ago they finally did it. It was a Friday and we spent the morning preparing for our Shabbat guests and then we flew down with our friend Chana to get there on time. After it was over, we once again flew back to Jerusalem in order to make it back in time for Shabbat and our 17 (!!) guests that night. Needless to say, many people worked hard to put together this clip and the final product is stunning, garnering positive feedback and plaudits from Acroyoga enthusiasts around the world for what is in fact the largest Acroyoga flashmob ever!

The only wrinkle in this story is that the video caught the eye of the folks at pro-Israel NGO StandWithUs. Hours after the video was uploaded to Facebook and YouTube by the choreographer Ofir Gothif, someone at StandWithUs downloaded the video off of Facebook and then re-uploaded it onto their own Facebook page without any attribution at all. No link to the organizers Facebook page, no acknowledgment or mention of Gothilf, nothing. Why? Perhaps they thought that the credits at the end of the video would be enough acknowledgement? Perhaps they thought that they were doing the organizers a favor by giving them more exposure? The end result is that as of this writing, the video has garnered StandWithUs’s Facebook page 155,000 views, 3,600 likes, 3,383 shares and 304 not-all-positive comments. For instance, Ronen wrote “Our Hasbara at its “best”. Shame on StandWithUs.” Niki wrote, among other things, “Don’t take something beautiful and turn it into a political tool.” The wife, who is also a certified Acroyoga instructor, chimed in as well with the following comment:

Hey StandWithUs! Thanks for digging our Acro Flash Mob – TLV 2016! It was so much fun to be a part of it and to share acro-joy with those around us. To give the benefit of the doubt, you may not realize this, but it’s actually really poor etiquette to download a video from someone’s page and upload it as your own without sharing the original video and especially without attributing proper credit. It may be an innocent mistake, but the concept of giving Hakarat HaTov (credit where credit is due) is a big deal in Judaism and conversely not stealing is even one of the Ten Commandments! Again, maybe a social media intern made a mistake or didn’t think it was that big a deal, but by downloading and re-posting this video as your own, you’ve essentially stolen 110,000 views and 2,431 shares that should have belonged to the flashmob’s creator and choreographer, Ofir Gothilf. That sounds a little bit worse now, ey? Judging favorably that stealing all of this wasn’t the intent of SWU, let’s fix the situation! The best thing to do is probably to message Ofir Gothilf with compliments on her awesome project, apologies for the misunderstanding and to ask her how she would like to handle it. My modest suggestion (which will take less than 5 minutes) is to re-post the original video to SWU.

Sigh. At the very least link to the people that made the video. It’ll take less than 5 minutes. All the links are here. To date, no one from StandWithUs has responded. I’ll update this post if there are any changes.

Otherwise, awesome job Ofir and the rest of your crew!

UPDATE: STandWithUs has now credited choreographer Ofir Gothilf with a three word addition to the post, namely “Credit: Ofir Gothilf.” There’s no link to either Gothilf’s page or that of the event organizers. StandWithUs did actually respond to Ayo but the comment uh… did not seem like it was crafted with public dissemination in mind. To say the least. The video is now up to 300,000 views and 5,100 likes.