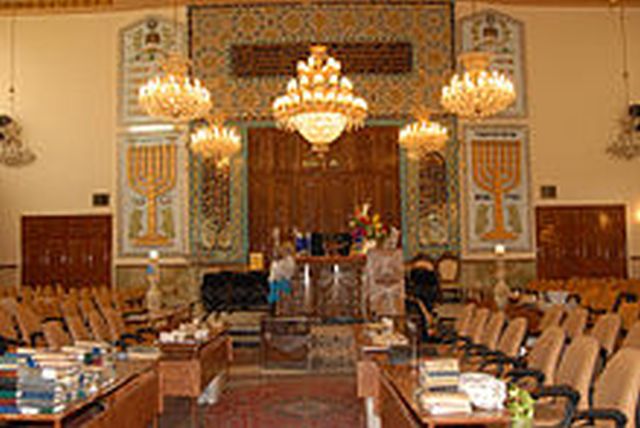 The YusefAbed Synagogue in Tehran.

Meshed, Islamic Republic of Iran, July 19 – The approximately twenty thousand Jews living in Iran today enjoy religious and political freedom rare in the rest of the Islamic Middle East, a recent report indicates, as they are allowed to espouse any political or ideological point of view that has already received approval from the central government.

A survey of religious and political freedoms in Islamic countries conducted by the Beliefs and Ideology Academic Society (BIAS) revealed that despite the widespread impression that Jews in Iran are prohibited from exhibiting beliefs or politics out of line with those endorsed by the Supreme Leader, in practice the community is left unmolested if they hew to the ideological guidelines implicitly laid out for them by the country’s leadership.

Researchers from BIAS studied the political environment of Iranian Jews since the Islamic revolution of 1979, and found clear indications that the religious freedom enjoyed by the community is unparalleled elsewhere in the region, excepting Israel. “We found that the openness of Iranian authorities to free Jewish political and religious expression far outstrips that of neighboring Jordan, Bahrain, and Saudi Arabia,” wrote lead study author Forrest Furthetriis. “The same holds true for Pakistan, the United Arab Emirates, Oman, Iraq, and Syria, for that matter. You simply won’t find Jews enjoying such freedom of expression in those lands the way you will in Iran.”

Furthetriis noted that according to the data assembled by the study, Jews were free to express their views on Zionism across a range of attitudes from indifference to vehement opposition. “We found data points along the whole segment of the spectrum between ‘I don’t see the State of Israel as a fulfillment of Biblical prophecy’ to ‘Zionism is a criminal movement that must be eliminated at all costs,'” he explained. “All of those positions are in tune with the sensibilities set forth by Ayatollah Ali Khamenei.”

The BIAS study also pointed to an irony in contrasting the freedoms Iranian Jews enjoy with the situation faced by Jews in, of all places, Israel. “We found that whereas in Iran, Jews who express virulent antipathy for Israel and Zionism tend to live normal lives and face minimal harassment from Muslims and the authorities, in Israel, a Jew who does so faces serious social and political consequences,” said Furthetriis. “In Israel, such people run the risk of not attracting enough voted to hold public office, and worse, find their employment options restricted to left-wing NGOs and Haaretz.”