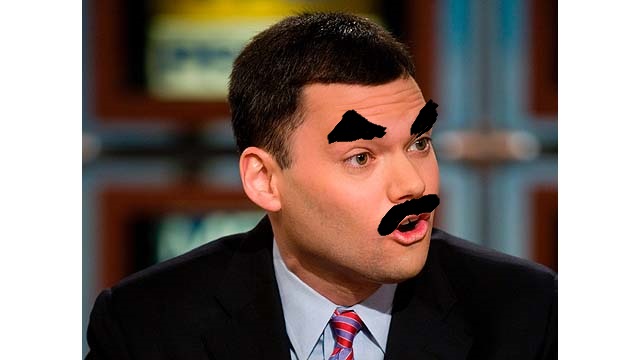 Peter Beinart is an asshole! There I said it. Why, you may ask… well if you have to ask? OK, I should be a bit more specific as to what he did THIS time.

As we all know Mr. Beinart falls into the Jon Stewart/TomFriedman/Woody Allen category of overgrown Hebrew school boys who think that just being circumcised gives them the right to hold themselves up as experts on anything having to do with Israel and Judaism. (See my previous comments on Beinart’s self-importance here.) Moreover, in Beinart’s case everyone knows that Israel can do no right in his eyes. So what now.

Well he was on Anderson Cooper’s show the day after Trump recognized Jerusalem as Israel’s capital because, of course, he is an expert on this issue. His expertise on the Mid-East Conflict is the same level as my expertise in medicine – I have seen every episode of ER and a few of St. Elsewhere too.

According to Beinart: 1. Trump’s decision kills the peace process because it stands as a statement to how the Palestinians can no longer trust America to be a neutral mediator and 2. Forty percent of the residents of Jerusalem today are Palestinians who have no rights as residents of Israel, can’t vote in Israeli elections and are denied basic services. Not surprisingly, not a single member of Anderson Cooper’s very large panel of talking heads challenged that assertion so I will.

Where to begin with such an unbelievably ignorant and knowingly provocative statement? First, it’s simply false. All of the people who live in the parts of Jerusalem which were part of Jordan before the Six Day War and which were officially annexed to Israel after it have Israeli residency. They pay taxes in Israel, can work in Israel, have Israeli identity cards and receive Israeli social services through the country’s version of Social Security and it’s socialized healthcare system. They also have the right to vote in the Jerusalem municipal elections, but choose not to.

This is because they do not recognize Israeli sovereignty over the parts of Jerusalem where they live. But this is shortsighted on their part since voting as a block in the Jerusalem municipal elections would give them a sizable share of the seats on its city council. By not voting and having their own parties (like elections for the Knesset, city councils in Israel are elected by a proportional vote and there are no city districts) they have only themselves to blame if they do not get more from the city government in the way of city services. Imagine if no one in the entire Bronx ever voted in the New York City elections, neither for mayor nor for city council, and as a result their districts went unrepresented. Would not the New York City government ignore that borough and its needs?

They also could have been Israeli citizens by now and vote in its national elections which would give them as many as three seats in the Knesset or 2.5% of its total membership.

As for the claim that 40% of the residents of Jerusalem are all Palestinian Arabs, this is also false. First it exaggerates their share of the population. But more importantly it makes it seem as if the residents of East Jerusalem are a monolithic block. The Arabs alone are divided into Christians and Muslims. There are also many non-Arab groups such as the Armenians and there are the other Christian groups who have lived in the city since the nineteenth century when their ancestors came to the city as pilgrims from different parts of Europe.

How about the part about America ceasing to be seen as an objective intermediary? Oh Petey! As a Jew you should know that we control the Congress through the lobbying of AIPAC and all the money that we give to political campaigns there. You already know that is why successive U.S. governments have blindly supported Israel against the interests of the American public. What is more Petey, you know that the entire Arab world already knows this.

But wait, there’s more! Beinart also kvetched that in giving Israel such a big prize without asking for any concessions in return Trump gave away too much to Netanyahu who now has less incentive to agree to concessions in the future. That’s right Petey, Israel has never made any concessions to date. Not one. It did not return all of the Sinai to Egypt for peace. It did not also cede land along the Jordanian border as part of a peace treaty. It did not unilaterally withdraw from Lebanon in 2000 with no guarantees of any kind only to see southern Lebanon turn into a Hezbollah mini-state and not once, but twice, have soldiers murdered in unprovoked cross border raids by Hezbollah.

As for Gaza, Israel withdraw from it unilaterally in 2005, dismantling all of its settlements there and relocating thousands of people against their will. And before there was any embargo of the Gaza Strip Hamas used Israel’s withdrawal as an opportunity to enact, in effect, a coups against the Palestinian Authority, taking over the Strip and proceeding to launch rockets into Israel from there and dig tunnels through which to commit acts of terrorism within Israel.

Oh right, then there was Oslo itself. In 1993 with the Oslo Accords Israel recognized the PLO, did business with Yasser Arafat himself, gave amnesty to wanted terrorists, gave weapons to the new P.A. militia, withdrew from most of Gaza and the West Bank, put security controls in the hands of Arafat and allowed for the establishment of a de facto Palestinian State, with nothing given it in return except for a few handshakes and empty promises from the other side.

So Petey, while it is a given that actual knowledge of anything is not a prerequisite for appearing on TV to talk about issues and while in America if someone just happens to be a Jew he or she is allowed to say whatever they want about Israel with impunity, you really go too far. So please just shut the *#@% up already.

As to be expected, Peter Beinart is not the only self-proclaimed expert mouthing off about this on TV. CNN’s correspondent Ben Wedeman is described as an expert on the Middle East by the network.

When asked if Donald Trump’s recognition of Jerusalem as Israel’s capital has “ended” the “peace process,” Wedeman said that it already died back in 2001 when Ariel Sharon was elected Prime Minister of Israel. WHAT? Sorry I mean – WHAT THE F%*$ S%#$ %#@$&*%$#!!!!!

That’s right! It’s all our fault! We the Israeli public killed the peace process when we voted for Sharon in 2001. Not Arafat who sent his people out to riot and commit acts of terrorism after he did not get everything that he wanted from Ehud Barak at the Camp David summit in the fall of 2000. Not the same Arafat who it has been proven instructed his people to aid and abet terrorist groups like the Islamic Jihad going back to even when Yitzhak Rabin was the Prime Minister. And it certainly was not the fault of Hamas for blowing up countless civilians on Israeli buses in suicide bombings which began as soon as the Israeli military withdrew from the major Arab cities in the West Bank and Gaza.

As for the effect of the announcement itself on life here, my friend Steve asked me how things have changed in Israel because of it. I explained to him that since the Trump announcement a new bright rainbow has been shining day and night over Jerusalem, gold began to grow on trees here and for me personally all of my back problems went away and my hair grew back. O.K. so I made up the part about my hair.

What exactly was supposed to happen? The facts and the reality of the situation here have not changed. The announcement pales in significance by comparison to historic events in the history of Zionism like the U.N. vote for partition 50 years ago and the Balfour Declaration 70 years ago.

As for the bad effects, Hamas started shooting rockets at us again out of the Gaza Strip supposedly because of the Trump announcement. As if it ever needed an excuse to do so. The State Department warned American citizens to avoid the Old City of Jerusalem. It does that about once a month anyway.

Why is it that no one ever talks about what the Arab world needs to concede to Israel in exchange for peace? When will anyone talk about them giving up their pipe dream of a right of return to Israel for Palestinians? Why do people keep exclaiming that the Temple Mount in Jerusalem is also the third holiest site in Islam? So what? Why does that preclude Jerusalem from being our capital? When will people start to ask why the other side does not give up on its claim that Jerusalem is their capital – a claim which was not made until after Israel became a reality – as a concession for peace?