Union Rules Broken When Jews Forced To Dig Own Graves 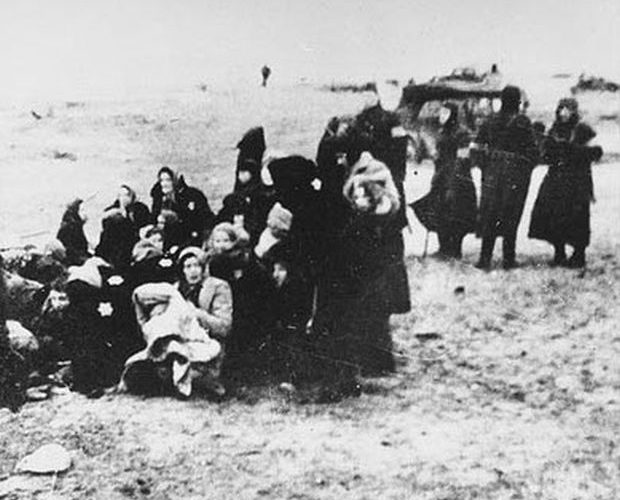 Riga, Latvia, April 11 – The head of a local professional association voiced dissatisfaction with the way mass execution of area Jews was conducted, charging that making the Jews move earth with shovels and their bare hands in advance of being mowed down by gunfire into the resulting ditches was a violation of agreements with professional diggers in the area.

Djim Hovfa, an Il?kste Diggers’ Union official, submitted a grievance to area Selbstschutz commander Oskars Baltmanis – who oversees Latvian auxiliary collaboration with Nazi occupation forces and Einsatzgruppen execution squads – to the effect that existing labor accords grant the union the exclusive right to dig graves in the Greater Il?kste area. He charged that when Baltmanis’s men forced about 4,000 of  the city’s Jews at gunpoint to march into Bi?ernieku Forest, dig a mass grave, strip naked, and line up in the ditch to be shot, they should have engaged the services of the town’s diggers’ union members to perform the ditch-digging task.

“My associates and I protest this flagrant violation of labor agreements that have been in force for years in this area,” read Hovfa’s message. “In wartime conditions, with economic challenges more imposing than ever, it is more important than ever not to threaten the livelihoods of the hardworking men of Il?kste, whose families depend on them for sustenance. For future operations, we therefore remind you of those agreements.”

“National Socialism must be applied properly,” continued the message. “I have sent a separate copy of this grievance to Einsatzgruppe leader Rudolf Batz, urging him to ensure true implementation of the ‘Socialism’ part of the movement’s name, in keeping with concern for the working man.”

Other union officials are mulling similar complaints. “The executioners’ union might also demand involvement,” allowed Hangmanis Furevreu. “I can also see our colleagues in the valuables-scavenging guilds submitting similar grievances. Making a living is tough enough without being deprived of our lines of work. This may call for a united front, if you’ll excuse the terminology.”

Nazi commanders have yet to respond to the complaint, but party bureaucracy and overlapping chains of command may stymie efforts to address it. Union leaders fear that by the time their concerns find the right people in the various hierarchies, there will be no Jews left in all of Latvia in whose murder the unions can participate. “That would be a tragedy, a crime, and we must make every effort to prevent it,” declared Hovfa.