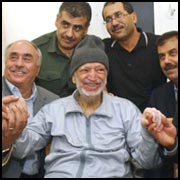 So how come I never get to go to Paris anymore and a murderous terrorist gets an open invitation from Chirac? Is it the $500 million he is rumored to have stashed away in Swiss accounts? Is it because Suha, his “wife,” lives in Paris and has obviously changed her diet from Middle Eastern to French cuisine?

Also, why does he look like a Cheshire cat? He seems ill, but as a few commentators have pointed out, the timing of this little illness is quite effective, with Sharon’s disengagement plan victory suddenly seeming immaterial if the “non-partner” on the other side is gone or replaced. Is this illness real of feigned? Was this a ploy? Will the wily old piece of scum who has survived all these years despite attempts to kill him, and even outlasted a plane crash where others died, finally let out that last foul breath? Or will he survive again, this time back in Europe, gallivanting around trying to promote his sinister plans for Israel and its inhabitants?