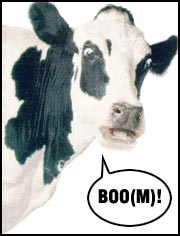 Forget gassing and electrocution, Hezbollah scientists are crowing with delight today after a new, accidental discovery is promising to make the organization rich beyond its wildest dreams. They have already contacted some shady attorneys from Dewey Cheatham & Howe who specialize in licensing law but may, one day, lead the country in the War on Terror. McDonalds is clamoring to buy the rights to this amazing new science, and we hear Burger King and Wendy’s are not far behind and the trio may enter a bidding war.

Hezbollah’s accidental good fortune began earlier today when, on a routine mission to ambush Israeli soldiers with hidden bombs so that their bodies may explode and die brutal and painful deaths, Hezbollah forgot to take into account that Mabel, a local cow, enjoys taking her post-grazing bowel movement next to the third rock of the fourth quadrant of the field across from Chamor Ibn Chamor’s watch tower on the Lebanese side of the border.

Upon reaching said third rock, Mabel began to drop her load. While the hidden bomb was carefully concealed, it was triggered to explode if any additional weight landed on it. Poor Mabel had barely a second to flash back upon her genteel life in the North of Israel before she became, well, the stuff of hamburger, steak, brisket, corned beef, tongue sandwich (in one lucky deli, anyway), pot roast, pastrami, beef stew and carpaccio.

While some Israeli soldiers are breathing a sigh of relief, Mabel’s owners are a little saddened by the loss of their cow and planning to launch a multi-million dollar lawsuit in US courts. They hope to entice Michael Chertoff to forego his appointment to head Homeland Security so he can return to private practice to clobber the terrorists in court – something he has had less success doing while in government.

Chamor Ibn Chamor has fled his watch tower temporarily, in the event the Israelis seek to retaliate over the dead cow. Settlers from Yesha are pointing out that if Israel disengages from Gaza, it will be inviting cow-killing terrorists to reside along these new breachable borders. Left wing pseudo-hippies living in cool, trendy but dilapidated South Tel Aviv apartments are claiming – between wild swings at the flying cockroaches who share their homes – that the incompetence of these terrorists is ample proof that Israel can handle any pullout from Gaza. In any case, they point out, FREE BEEF! Arik Sharon and his ministers had no comment, although he has apparently ordered beef ribs and cholent with kishkes for shabbat. Rabbis throughout the land are warning their congregants to avoid cow meat for several days so as not to accidentally eat part of this treyf meat.

The Hezbollah scientists? They are thrilled with the outcome! They are already planning smaller and lighter bombs which can kill the cows but with fewer, uh, roasted parts. And they have already asked Hezbollah leaders to make sure that a nomination to the appropriate Nobel Committee will be forthcoming (a stinging debate is raging as to whether they qualify for the Chemistry or Medicine prize).

The French President, Chirac, has sent a congratulatory note expressing sadness that the bomb missed its intended target but assurances that he will send his own personal chef to help with preparation instructions for boeuf bourgignon. Prince Harry of Britain has also sent a note of apology for not being able to come and celebrate with the Hezbollans, apparently he has to visit Auschwitz to appease some Jews. Best of all, Dutch fans of the Ajax football club have decided to convert en masse and make aliyah in the hopes of increasing the average height of Israelis.

Oh, in the South of Israel, another bombing by terror groups was much more successful and 6 Israeli civilian security guards are now dead. It’s war, and some Israeli soldier near the Lebanese border is lucky as hell that Mabel died in his place today.