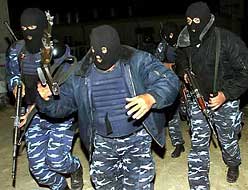 It’s really a shame, when you think about it. Three young Palestinian men are to be indicted tomorrow in Be’er Sheva for trying to open a factory. It was going to produce Kassem rockets, but so what? Don’t they deserve to establish an enterprise? Is it their fault they want to kill Jews and destroy Israel after all those martyrdom commercials the PA has been running for years?

Already however, there are rumors of support for the trio. Human rights organizations like Amnesty and Human Rights Watch are planning to petition foreign governments to arrest any visiting IDF officers involved in the tracking and arrest of these young men on the grounds that restricting economic development is a war crime.

James Wolfensohn, still smarting from that $500,000 he lost when the Palestinians destroyed the greenhouses left behind by the settlers, is fresh from attacking Israel for keeping the Gaza border closed for – of all ridiculous reasons – security purposes. Now he has gotten a group of donors all lined up, not to mention the EU and the Quartet, and together they plan to petition the Israeli government to stop backtracking on its forward movement toward peace with the disengagement by arresting these businesspeople. How are Palestinians supposed to make a living, these fine diplomats ask, if one undermines their business infrastructure?

Thomas Friedman, writing in the NY Times, praises Arafat and his leadership prior to his death and reminds his readers that under Arafat’s rule – unlike that of the current wuss, Abbas – Palestinians were very successful at building Kassem rocket factories.

Best of all, it is rumored that the newly-wed wife of Yigal Amir, who allegedly married him in some sort of weird long-distance ceremony accepted by a bunch of very odd rabbis who don’t quite mind Amir’s murder of Yitzhak Rabin, has indicated that since the Prison Service refuses her conjugal visits with Yigal, she may seek to divorce him and marry one of the enterprising Palestinians. Apparently the Prison Service is less averse to them enjoying conjugal visits since they did not murder an Israeli PM. It is unknown how the rabbis will respond this time since no PM has been murdered. Furthermore, Amir has been overheard screaming, “A get?! A get?! Never! I’ll shoot you in the back first!”

On the other hand, there are voices in Israel speaking up on the entrepreneurs’ behalf already. After hearing how the three Palestinians smuggled themselves out of Gaza, bribed Egyptian soldiers, snuck into Israel with their manuals and some basic elements of bomb-making, and managed to evade the IDF for a few hours, the CEO of a major Israeli bank was overheard saying, “Kassem, shmassem, those three would make terrific associates and I plan to hire them. Let them convert Kassems into investment banking research!” An aide was overheard reminding the CEO that the verse actually said “swords into plowshares,” but the impatient CEO – a graduate of a well-regarded management program of an ivy league school – reminded the young man that anybody who still farms is a sucker (“fryer”).

Rumor is that some of the million Palestinians left back in Gaza plan to try again with a different factory. In the meantime, some are planning to kidnap Israelis so the government will exchange this trio. The goal, of course, is to revive the moribund Palestinian economy.

Reporters Without Borders has condemned Ha’aretz for referring to the three prodigies as “radicals.”