So now what will they do for comic relief?

As we all know, the helmet has served soldiers in the IDF in illustrious and impressive fashion over the years. Now comes the sad story of how a helmet may bring about the demise of practical jokes in the Israeli army – unfortunately just before our friend Michael joins.

Yes, Ynet (Yediot), in a feat of extraordinary Pulitzer-worthy reporting, has given Israel the story of the poor, harrowed young IDF recruit who was the victim of **gasp** a practical joke. It appears that some of the older guys around, probably doing their reserve duty and bored to tears, played a joke on the hapless young man. The joke? They created an elaborate scheme to convince him that he has to wear a helmet – used primarily for heroic as well as boring and tedious outdoor combat situations – indoors while sitting at the computer doing his desk job. Using signs and authentic-looking letters on unit letterhead, the guys created an entire ruse and convinced their victim that he needed this combat wear over his head at all times because the roof above him might cave in. 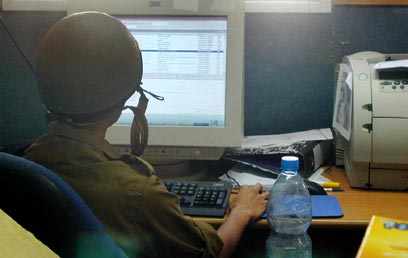 They then proceeded to record the event on film for posterity.

You can just picture these folks cracking up in the next room as the naive 18-year old fell for their silly joke. Comic relief. Who doesn’t need some now and then. But then Ynet came along and reported the story. Next thing you know, the lad is humiliated and the IDF is actually angry at their soldiers and officers who participated in the ruse. They might even face some military prison time.

Can’t we just laugh and move on to, uh, you know, important things?