Oh What A Tangled Web We Weave 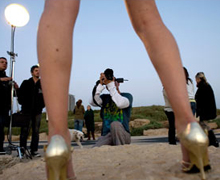 Israel’s gone to the dawgs, at least marketing wise. On April 9, Newsweek posted a piece to their site entitled “Babes in The Holy Land” which talks about the sex-selling turn Israel is taking in their tourism industry. Tourism in Israel, which formerly boasted a $2 Billion/yr revenue is now suffering and so the country is trying something new. Instead of promoting eretz (as was done in the past) and spirituality, they are marketing hot chicks on the streets of Tel Aviv by way of Maxim, that magazine that caters to the male libido.

Many, including former Tourism Minister Benny Elon are saying the titty route will cause Israel to suffer a setback in Israeli hasbarah and one that could cost the country dearly in both image and dollars. “Israel’s unique selling proposition is its religious. It’s the only state where you can take the Bible as your tourism guide.”

Still others such as famed lawyer Alan Dershowitz are claiming that pandering to the Religious Right (a “pet project” of Elon’s) is a foolish route for Israel to go, in that it will wed them to Arch Conservatives which can’t be good for their reputation.

Either way, the sordid scene that Newsweek describes on set of the Maxim shoot and Israeli consular David Saranga’s reactionary grin to his accomplishment in wooing Maxim to eretz Israel leads me to think this isn’t such a hot idea:

Jim Malucci has two tattoos, one on each bulging bicep. On the left one, the photographer for Maxim magazine has etched an image of a seductively dressed pinup; on the right, he has stenciled the words GO WITH GOD in Portuguese. He leans on his left arm and points his camera at a model in a bikini on the Tel Aviv beachfront. “That’s hot, that’s wicked,” says Malucci, as the model shifts her hips and parts her lips. “I wanna see the curves. That’s it, honey. On your knees, legs apart. Nice arch in your backâ€”boom!” The flash flickers as the sun drops toward the Mediterranean. A Hassidic man in a black hat accidentally steps into the frame. “Love the guy with the hat!” Malucci says, chortling.

As World Hum astutely commented, “Okay, Mr. Marketing Guru, how about this one: How do you reach the conflicted young man who enjoys Maxim‘s Hometown Hotties and the Book of Job? Do you go after the angel on his left shoulder or the devil on his right? Or both?”