Should Shlomo Sand offer a refund on his book now that another study has refuted it? 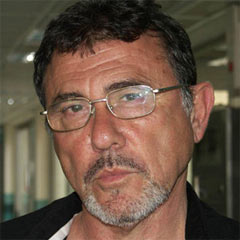 Shlomo Sand has been discussed on these pages before. However, his book still garnered immense attention, at least one very prestigious prize, a place on some bestseller lists, translation into numerous languages and the authority which comes with such success. There is one particularly telling Youtube video of a talk that he gave where he is challenged by a Jewish member of the audience and takes him apart by commenting that the gentleman doesn’t actually belong to the Jewish people since there is no such thing.

When challenged regarding DNA results that suggest that his thesis that the Jews are really descended from the Khazars and other groups, Sand was quick to dismiss those claims, suggesting that the studies point to other conclusions or are flawed. Yet now another study has been published that also refutes his thesis.

Now, what I’ve found particularly pernicious with Sand is that when challenged about the DNA surveys, he will usually attack the person who asked by suggesting that there is something inherently wrong with seeking identification along biological lines in this day and age. Of course, what he fails to mention is that it is he who is bringing up biology and trying to discredit the possibility of such a connection even though the science proves him wrong. This was not what drove the Zionists to establish Israel and it did not drive them in creating that society.

Now, really, after having to read him, view him and watch people who hate Jews and even those who don’t hate Jews but wish to undermine Israel, use his book and claims to disparage Israel and the Jewish people in general, is it too much to ask of Dr. Sand to apologize and send a refund to buyers of his, um, science fiction?

Here’s an article about the study:

To better understand the ways in which current Jewish groups are related, Dr. Burns and his colleagues, including principal investigator Harry Ostrer, M.D., professor of pediatrics, pathology and medicine at NYU, performed a genome-wide analysis of the three major groups formed by the Diasporas (the scattering of Jews into Europe, and throughout the Middle East): Eastern European Ashkenazim; Italian, Greek, and Turkish Sephardim; and Iranian, Iraqi, and Syrian Mizrahim Jews.

A total of 237 participants were recruited from Jewish communities in the metropolitan New York region, Seattle, Athens, Rome and Israel. Subjects were included only if all four grandparents came from the same Jewish community. The results were compared with a genetic analysis of 418 people from non-Jewish groups around the world.

The researchers found that Jews from the major Diaspora groups formed a distinct population cluster, albeit one that is closely related to European and Middle Eastern non-Jewish populations. Each of the Diaspora groups also formed its own cluster within the larger Jewish cluster. Further, each group demonstrated Middle-Eastern ancestry and varying degrees of mixing with surrounding populations. The genetic analysis showed that the two major groups, Middle Eastern Jews and European Jews, diverged from each other approximately 2,500 years ago.

“The study supports the idea of a Jewish people linked by a shared genetic history,” said Dr. Ostrer of NYU. “Yet the admixture with European people explains why so many European and Syrian Jews have blue eyes and blond hair.”

I think I know what Sand can do! I know how to save his retirement!