Get Taxi: Another Israeli Innovation

Hey, kids! Â Did you hear the news? Â Israel ain’t just a desert anymore! Â I know, I know, to most of us, it’s not so newsworthy. Â The book “Start-Up Nation” did a great job of explaining how such a tiny country has been able to become such a hotbed of innovation. Â Every other day, it seems, there’s an article about some new hi-tech start-up changing the world or at least making our daily lives easier. Â Check out this one which I just came across.

So hailing a cab here in Israel drives me nuts. In New York (for exampleâ€¦that’s the only place I lived in the States where I had to take public transportation), an empty and available cab is indicated by the light on the roof. Simple system: 40,000 cars driving down the street, you see one with a light on, you stick your arm out. Here, no system. You squint and try to see if the car is taken or not. If you’re lucky, the desperate driver will honk at you.

Does that bother anyone else? WELL, DO I HAVE A SYSTEM FOR YOU!? As reported here in Israel21c, this new Israeli-designed app called Get Taxi allows you to order a cab on your phone and watch it move on the map towards you in real time.

Allowing users to share their experiences and favorite drivers with their friends, as well as game elements (beat your friends to an event?) are also planned for the application. Like frequent-flyer programs, mileage points and rewards are also part of the fun for users.Â

Coordinated with taxi drivers, who install a simple-to-use module in their cabs, the GetTaxi app doesn’t only work for travelers. It provides safety for drivers, too â€” not only in assuring they will collect the fare, which can be paid for through the system, but also in protecting them from assault better than a plastic partition can. 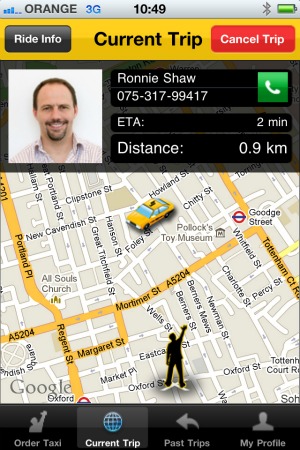 Just as the riders get information about their drivers, the drivers can also track and trace their fares â€” expected to be a big selling point for its added safety and security.

Pretty cool, huh? Â If anyone has too much to drink with CK in Nachlaot, getting home safely just got even easier! Â AIN’T LIFE GRAND?

Benji Lovitt is a stand-up comic and writer who performs in Israel and North America.