Yasser Arafat Ordered and Funded Acts of Terror During the Second Intifada. Duh. 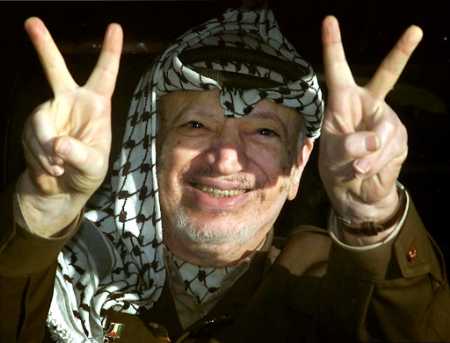 Haaretz recently got their hands on court documents related to civil suits brought by victims of terror against the Palestine Authority and Marwan Barghouti, the secretary general of Fatah’s Tanzim militia (currently jailed in Israel). The documents were transcripts of interrogations that took place 10 years ago after Barghouti was captured by the Duvdevan (Cherry) unit of the IDF. Barghouti, who founded the Al Aqsa Martyr’s Brigade, gave confessions that led to his conviction in 5 terror related deaths. Barghouti’s confessions also indicate that PA Chairman Arafat issued a general directive to carry out terror attacks, but made sure not to get personally involved in any way that might incriminate him.

He repeatedly emphasized that conducting the activity during the uprising could not have continued without Arafat’s financing, because all the money that reached the activists came from one source, Abu Amar [Arafat]… When Arafat would call for a cease-fire, he would convene the heads of Tanzim and instruct them and add that if the cease-fire were to end, they knew what they would have to do, when it was clear to everyone that he was talking about a continuation of military activity… Barghouti insists: You don’t understand how Abu Amar operates. That’s Arafat’s nature. He doesn’t say specific things. Had he wanted a stop to the intifada and the attacks, he would have done so.

Barghouti’s interrogators made sure that he was well fed, serving him a plate of hummus, tahini and vegetables during one session and hot and cold drinks, two pieces of toast with yellow cheese and Bulgarian cheese, a tomato and spearmint and some yogurt at another. They also noted that Barghouti had “a well-developed sense of humor” and that he provided his interrogators “with a number of great jokes.”

The IP conflict is like, a never ending source of weirdness. The Haaretz article is mandatory reading for those interested in an intimate window into the reality behind the headlines.