ISIS Wants to Kill ALL the Jews 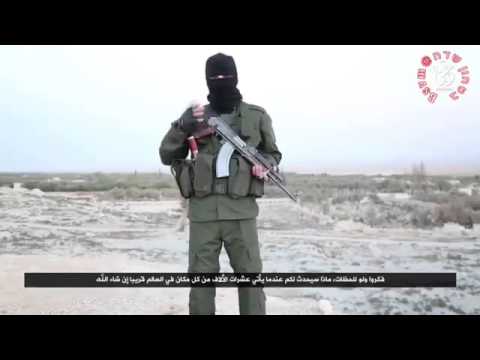 According to a new video put out by ISIS, once the Caliphate kills everyone in Syria (which should be soon apparently), they will kill all the Jews in Israel and in the whole world. No seriously you guys! All the Jews everywhere! And soon.They figure what with all the havoc caused by a few punk teenagers with knives, it’ll be total genocidal pandemonium when ISIS invades. So yeah. I’m a dead guy, unless… anyone wanna buy a nice apartment in Jerusalem? Anyone?

Gah. YouTube deleted the video. But go to JewTube and they are hosting the entire video AND translated the Hebrew to English. CHECK IT OUT!

This is an important and clear announcement to all the Jews, and represents the will of the Muslims. To all the Jews who conquered the land of the Muslims, the real war hasn’t yet begun. And all that you’ve undergone in the past, it is simply child’s play compared to what is going to happen to you soon, God willing. Do whatever you like in the meantime, until we get to you. Then we will pay you back ten-fold for the crimes you have committed. We promise you that soon, not a single Jew will remain in Jerusalem and in all corners of the land – and we will continue until we eliminate this disease from all the world. Look at what happened to you after a few car and knife related incidents perpetrated by our brothers in Palestine. You fell on your heads and feared any driver that drives fast. You fear any person holding something in his hand. That is what your level is! Think for a moment what will happen to you when, God willing, tens of thousands will come to you from all over the world – in order to slaughter you, in order to throw you irretrievably into the trash. That’s on top of car bombs, which even the smallest Muslim child is willing to drive in order to send you directly to hell. The borders of Sykes-Picot that protect you, will remain intact for long God willing. And just as we obliterated these borders in Syria and Iraq, we will, Godd willing, obliterate them between Syria and Jordan, between Syria and Palestine, and we will continue and obliterate these borders everywhere God willing. And these aren’t simply empty threats. We are coming at you from all directions, from north to south, from Sinai to Damascus, from all corners of the world we are coming to you to eliminate you. And we swear to you, that we won’t forget even one drop of blood, shed by all the Muslims that you have killed, that you murder every day. We see this. We see your crimes every day, and the account between us increases more and more. And we are thus ready, very soon God willing – maybe you think that this is not going to happen for a long time, or that it is too difficult for us to accomplish. But we see that it will be really easy. And soon! Also, does anyone know any cute single goats? Please let me know in the comments. Thanks!