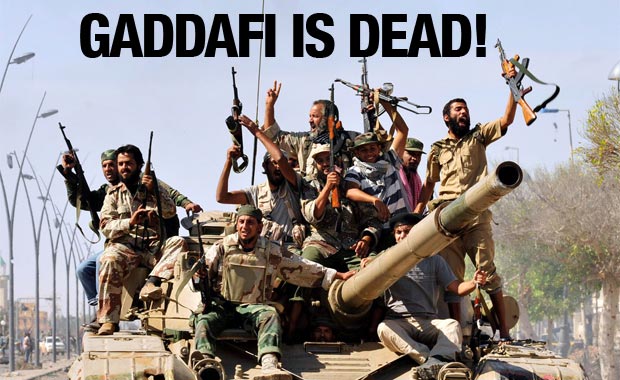 Both the New York Times and Al Jazeera are reporting that Libyan dictator Muammar Gaddafi (or Col. Muammar el-Qaddafi according to the NYT or however it is spelled) is dead after being wounded in the battle for his hometown of Sirte.

Abdul Hakim Belhaj, an NTC military chief, has confirmed that Muammar Gaddafi has died of his wounds after being captured near Sirte… The body of the former Libyan leader was taken to a location which is being kept secret for security reasons, an NTC official said… “Gaddafi’s body is with our unit in a car and we are taking the body to a secret place for security reasons,” Mohamed Abdel Kafi, an NTC official in the city of Misrata, told Reuters.

Abdul Hakim Belhaj, the leader of the Tripoli military council and the highest ranking military officer in Libya’s interim government, confirmed on Al-Jazeera TV that Gaddafi had been killed and that his forces had his body. As news spread of Gaddafi’s death in the capital, Tripoli, car horns blared as many celebrated in the streets. The interim government is now expected to call elections within the next eight months.

Meanwhile back in Syria, protests are turning into armed resistance as the Assad regime deals with an economic meltdown. Could Basher Assad be next? Stay tuned!

And what does this mean for the Jews? It’s hard to know right now. One can assume that the financial support provided by Gaddafi to anti-Israel terrorist organizations and entities is going to dry up, at least in the short run, as the Libyans focus on rebuilding their country. It is however unlikely that Libyan attitudes toward Israel and Jews are going to change dramatically after decades of government propaganda and brainwashing. We have already seen how the Arab Spring is able to topple dictators but it cannot remove deep seated hatred.

More Gaddafi is dead photos released by liveleak. Not gonna show them here though. We have to keep everything family friendly!