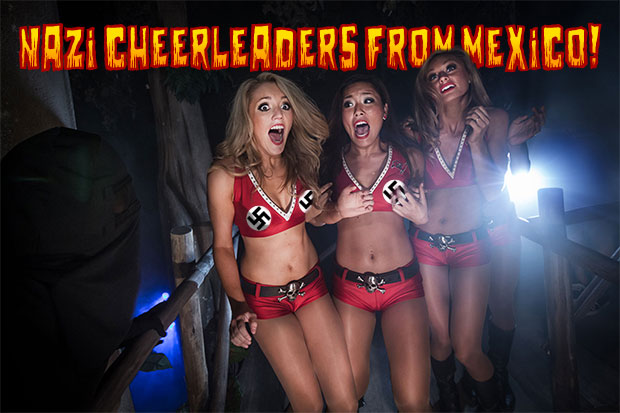 Yeah. Last May, Guadalajara, Mexico hosted a massive cheer-dance competition, featuring 192 teams from across the country. One such team did a routine featuring military uniforms, marshal music and… swastikas. The fairly energetic routine concluded with one of the girls greeting the audience with a Nazi salute as a huge swastika flag was unfurled. The girls, aged 10-16, understandably received a lot of criticism once the video made its way onto social media. Some have claimed that the routine was meant to be a critique of Fascism with the dancers in white representing victims. But still. The video inspired so much anger that event organizer Enrique Casas said he would not identify the team for security reasons, because the comments on social media sites “have been a little aggressive.” Sure, there may have been some artistic attempt to make a commentary about dictatorship and oppression, but when you just throw that out at an audience, in the context of a cheer leader competition, a little bit of confusion and offense might be understandable. Can people really be that clueless? Please, tread carefully around Nazis. No Hitler ice cream. No dressing like Hitler in school. No Hitler fried chicken. No Hitler shampoo. Just no. And please no, no Nazi cheerleaders!